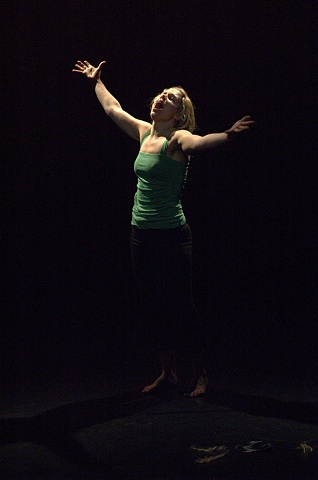 “This past weekend’s dance show Anthology Vol. 1 was Tracey Norman’s first time presenting a concert of her own choreography of solos and ensembles. She graduated from York University in 2003, but already she has developed her own signature.

Three of the four works included text, and this is where Norman is strongest. Her droll and ironic sense of humour was found in Waving from the Inside (2004), Gifted (2007) and her new piece Insomnia. The weakest link was 2006’s Are We There Yet! which was movement only.

Are We There Yet!, about video games and competition, was certainly bruisingly energetic and athletic, but seemed routine. The minute the dynamic of text-inspired movement was added in, her works became refreshing and original. Words inspired Norman to use movement in a more inventive way to highlight and comment on, but not necessarily mirror the meaning.

At this point in her career, Norman is most engaging as a dance theatre artist."

-Paula Citron, arts reviewer for THE NEW CLASSICAL 96.3 FM; April 21, 2008 "Norman oozes character skills and is a sprightly, if not original, athletic performer. She has carved a niche as a stand-up comedy dancer.

A dancer who likes to act, Norman gets a laugh with funny business such as the sudden entrance of Dr. McDreamy from Grey’s Anatomy: a woman in a white lab coat wearing Patrick Dempsey’s photograph plastered to her face.

In Insomnia, a new piece billed as “some of the stories of my life,” she portrays a young housewife mother flirting with her yoga instructor while practicing her poses.

The work begins with a dream account that makes one wonder if the choreographer is regressing, but in the last segment she hits her stride. Enacting both roles, she does Stephen Harper playing Roger to her Mark in a final scene from Rent.

-Susan Walker; Toronto Star: April 2008 “For Anthology Vol. 1, emerging dancesmith Norman has gathered four of her works to be performed by nine talented dancers. As a choreographer, Norman is drawn to a wide range of subjects and always includes unexpected details in her movement. The remounts include Waving From the Inside (2004), inspired by the dreams of the dancers; Are We There Yet? (2006), a futuristic take on speed; and the excellent Gifted (2007), about innocence forced into murky waters. Her new work is a hilarious solo titled Insomnia.”

With five years of experience behind her and a growing sense of confidence in her art, local choreographer Tracey Norman decided it was time to showcase the best of her diverse pieces.

Norman, who lives in the Lawrence Park area, will be presenting her first ever collection of works in the aptly named Anthology Vol. 1. Given her success in her chosen profession, few could argue that Norman was not due to showcase some of her best works. She has been commissioned to choreograph pieces for DanceWorks, the Canadian Children's Dance Theatre, Dance Ontario, Festival de Danse en l'Atlantique and the Toronto International Dance Festival, among others.

"I've done festivals and been commissioned to present pieces but never presented a show all my own because I didn't really feel ready for this," she said. "After five years, though, it started to become evident that I needed to put some of my works together."

Norman took her first organized class (a jazz class) at the age of 12. In the ensuing years, she found she was becoming more and more drawn to the art form.

"I started later than most, because most people in the industry got their start when they're around three years old," she said. "At first, I thought it was a good physical outlet, but in my teen years, it became less about the physical activity aspect and really became something I was passionate about."

Norman's work is diverse, as evidenced by the lineup of pieces showcased in Anthology Vol. 1. The show will include the world premiere of the comedic piece Insomnia, which incorporates bouffon and Broadway styles, the surreal Waving From the Inside, the dark, athletic Are we there yet? and the mythic Gifted. The pieces will be performed by some of Toronto's top dancers - including Norman herself - and incorporate text and voice in addition to movement.

"I've always used voice and text, but lately I feel I'm using them more effectively," Norman said. "Some of the pieces are remounts, but I think you can really see a difference in quality from where I started out."

The choreographer draws her inspiration through everyday stories coupled with her own personal experiences and creative juices. While any artistic work is bound to contain political elements, Norman said she has been able to rein in some of her own personal biases through experience and maturity. "You're going to put your own politics on stage in any piece, but you have to be careful not to be too overt," she said. "I think I've gotten better at seeing the big picture. I've realized that just because I'm drawn to a subject doesn't mean I have to make a dance about it."