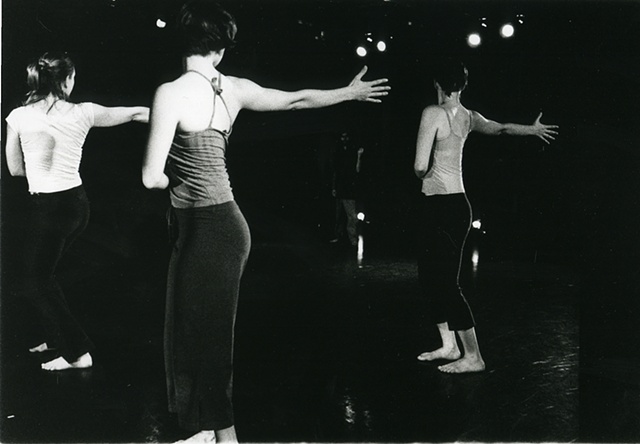 “Meaty: Tracey Norman for her challenging quartet that explores the meaning of home (14 stairs; 1 window)"

“…Tracey Norman’s 14 stairs; 1 window, which featured three female dancers, two of them creators or performers of other fFIDA pieces, along with composer/violinist Kousha Nakhaei. All four moved randomly about the stage while musing aloud on the idea of home (:a terrycloth bathrobe,” “the stairs,” “CBC,” “old clothes”).”

-Susan Walker; Toronto Star: August 2004 “York dance alumna Tracey Norman (BFA 2003) has choreographed an original piece titled 14 stairs; 1 window which will receive its world premiere at fFIDA. Her last piece was shown at the Season Finale of Series 8:08, a choreographic performance workshop, held in May at Dancemakers’ Studio in Toronto. Her other works have been presented at Celebrate Toronto Street Festival, fFIDA 2003, Junction Arts Festival, Series 8:08 and Small Potatoes Series. She is currently dancing in a work choreographed by her York classmate Kerry Rathje.

Over the course of her studies and her career since graduation, Norman discovered that the word “home” means many different things to different people. “Where we come from geographically, environmentally and genetically shapes our relationships with others”, she said. “14 stairs; 1 window involves three women with different ideas of home who share a home together for a time. The exploration will be somewhat personal for the performers, as it draws on their own thoughts and stories of homes that exist for them as buildings, people, communities, feelings and more. The text is original and the music is an original composition for violin by Kousha Nakhaei.”