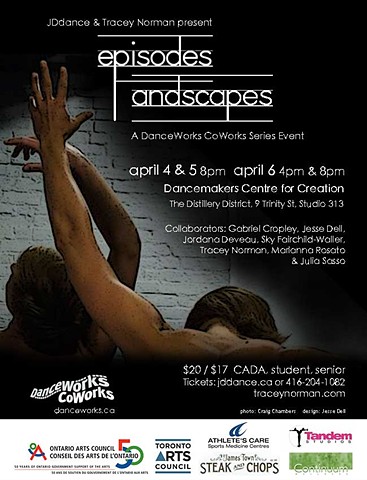 In Tracey Norman's Witness, two women (Jesse Dell and Jordana Deveau), become aware of each others' gaze. One moves in on the other, triggering an attraction-repulsion interaction. Circling and assessing each other. Imitating each other's moves. Physicality that becomes aggressive and violent. Until the moment when one falls, and the other picks her up by clasping her around the shoulder and lifting her to a position not unlike that of a war casualty. Throughout the piece a muffled voice suggests an observer witnessing them and commenting. Are they aware of this? Is being observed affecting their interaction?

In Tracey Norman's 43ºN 79ºW, a couple (Jesse Dell and Sky Fairchild-Waller) navigate through life reacting to the signals sent out by the body language and facial reactions of each other. Some of these signals are misinterpreted and threaten the codependence and trust. Result is, at times, like a face-off where the players measure each other and work out their next moves. Ends with each lying exhausted, backs to the wall, reaching out to each other.

Lighting designer Gabriel Copley uses shades of light and darkness to reflect the inner landscapes or souls of the dancers. In Witness, the couple is first seen in a blur of darkness, brightening gradually as each gets more involved with the other. The lighting for each piece gives the back wall a hard metallic grey texture. Soft bodies pushed against it. Sliding down. Resting against. The long back wall in the space at Dancemakers has windows. When covered, the windows further give an aura of imprisonment in space and in the relationships.

Choreographers Jesse Dell and Tracey Norman evoke insightful moments of intimacy, codependence and miscommunication in relationships with compelling emotionally intense body language. Including one possible unfortunate casualty. A woman. Alone. Boxed in. Her inner landscape rife with a mix of resignation, rage and hope. Rebuilding her life.” * -Ted Fox, Evidanceradio.com, April 2013* “She touches me in a way only my husband gets to touch me,” Sky Fairchild-Waller admits of the intimacy he shares with fellow performer Jesse Dell in their duet 43N 79W, part of episodes | andscapes, a new collection of three contemporary dance pieces from JDdance, otherwise known as Jesse Dell, Jordana Deveau and Tracey Norman.

Part of the 2012/13 DanceWorks CoWorks series, which showcases fresh contemporary dance talent, the show consists of three independent dances: a solo, entitled Witness, sandwiched by two duets, Pushed and the aforementioned 43N 79W, each piece exploring issues of locality, memory and, perhaps most noticeably, intimacy. The final piece features Dell and Fairchild-Waller, two queer performers, telling a story that Dell says is not about a man and a woman, but merely “two human beings on an intimate journey.”

The goal of the two performers and choreographer Norman was to create a work that would be free of stereotypically ascribed meanings and relationships. The trio have been collaborating and dancing variations of their episode since 2009, when Norman originally envisioned it as part of her master's thesis, and are excited for it to be included in the DanceWorks season.” -John Crouch, FAB Magazine, April 2013 “This week, in collaboration with Tracey Norman, another local dance artist, JD dance is presenting episodes | andscapes, a program of three new choreographies that’s part of this season’s DanceWorks CoWorks series.

Two duets by Norman, the first for Deveau and Dell, the other for Dell and Sky Fairchild-Waller, bookend the program. In between is a solo Dell made for Deveau. One of the new Norman duets, 43 Degrees North, 79 Degrees West, is named intriguingly for the geographical co-ordinates of Toronto. Dell says themes of “intimacy, locality and memory” run through the program.

As is common among younger choreographers trying to forge new ways of making dances, the works on view are intended to engage an audience without specifically shaping its reaction.” -Michael Crabb, Toronto Star, April 2013