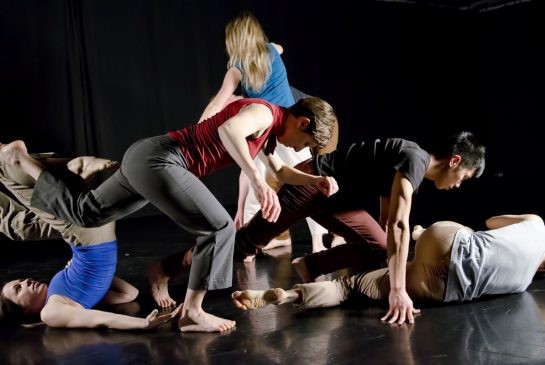 no permanent answers
< previous next >

This dance double bill features stalwart performers from Toronto's indie scene. Tracey Norman's even more meticulous what goes between focuses on the connectivity of her cast, four dancers (Beth Despres, Brittany Duggan, Sky Fairchild-Waller and Marie France Forcier) who exude and ride invisible yet palpable currents in an ever-shifting and shared energy field -Kathleen Smith, NOW Magazine, July 2013 This brings me to the second dance piece called what goes between. What stood out were the still moments between the dancers. I followed their glances as they stared silently at each other. I wondered what the intention was and what the stares could mean. The dance was mixed with intensity and versatility. I caught glimpses of emotion between the dancers. -Ashima Suri, Mooney on Theatre, July 2013 Outstanding Ensembles: no permanent answers -Jon Kaplan & Glenn Summi, NOW magazine, July 2013

Conversely, some dance artists in this year’s Fringe are not confining themselves to movement. Angela Blumberg, who’s joining forces with fellow choreographer Tracey Norman for a shared program called no permanent answers, is taking advantage of the Fringe to try something new. “The majority of Fringe-goers are theatre-oriented people,” says Blumberg. “Therefore, I decided to stretch my choreographic approach, to move away from abstract dance and instead combine dance, spoken word (in the form of narrated voice) and music. I hope that by offering multiple entry points my work will speak to a wider audience.” Blumberg also believes regular Fringe theatre artists, particularly of the solo show/personal narrative kind, have learned that it’s not easy to hold an audience’s attention for an hour without injecting some variety. “It helps to be more versatile, to draw from a wider palette,” says Blumberg. -Michael Crabb, Toronto Star, June 2013

“No Permanent Answers,” by choreographers Angela Blumberg and Tracey Norman of the company Human Atoms, uses an interdisciplinary approach to trace the way our lives can be intertwined by seemingly unrelated events. There is a lot of dance at the festival this year, but this is sure to be one of the best. -Mark Mann, Blouin ArtInfo, July 2013

Angela Blumberg and Tracey Norman never fail to leave a great impression. Individually both their choreographic styles are beautifully physical and subtly compelling. The cast for no permanent answers is another group of highly talented performers. -Emma Letki, Mooney on Theatre, July 2013

Dance alumni Angela Blumberg (MFA ’11) and Tracey Norman (BFA ’03, MFA ’10) joined forces to choreograph an intricately crafted full-length program, titled no permanent answers, on stage at the Randolph Theatre. The production comprises two “highly visceral” premieres performed by 10 dancers including Blumberg, Brittany Duggan (BFA ’09), Sky Fairchild-Waller (BFA ’09, BA ’10), Jasmyn Fyffe (BFA ’07) and current York dance student Irvin Chow. Having met at York, Blumberg and Norman came to admire each other’s choreography and felt their work would be complementary in a joint production. Throughout creation and rehearsal, the duo was in frequent contact. “I think there’s a great deal of trust between Angela and me in putting this show together and helping each other out wherever possible,” said Norman. “I can speak for us both, I think, in saying that collaboration is one of the keys to our artistic practice. It’s constantly something you have to think about and juggle – how to follow your artistic vision and at the same time be a generous collaborator.” -Amy Stewart, YFile, July 2013